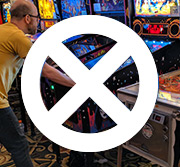 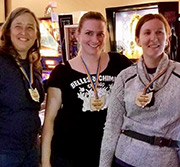 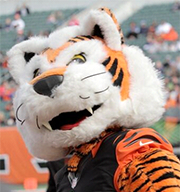 Qualifying will be 8 rounds of single game matchplay. The top 16 players after the 8 qualifying rounds will make A finals. The next 16 players will make B finals. 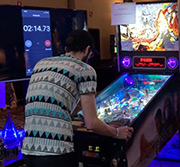 There are 6 games in the Gauntlet. Each game will have a posted goal on them. When you start, you have 6 mins to complete all 6 tasks. 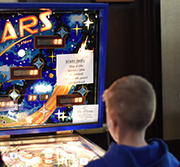 Under 16 can play. Free to enter. Players may sign up at the ticket desk all weekend. It will be a 3 strikes tournament with 2 strikes to a 4 player group, and 1 strike to a 3 player group. Starts at 11am. Trophy to the winner, and plaque to places 2 and 3. 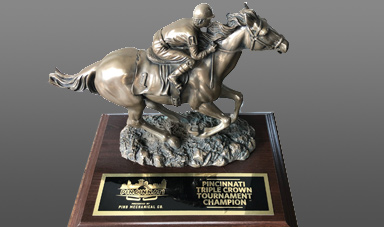 If you happen to win all three main events at the Pincinnati Pinball Show, you will receive the coveted Pincinnati Triple Crown Champion Trophy. This trophy comes with a bonus $400 cash prize. Should no one win this trophy, the prize will carry over to next year plus $100.

Starts at 5pm, check in at 4:30pm. Limited to 100 entries. All games will be on free play. After half of the field is eliminated, there will be a 30-min break, after that the tournament will switch between the older half of the games and the newer half of the games each round. Log into http://Matchplay.events/ to see your groupings, enter results for your group, and follow along with the event.

This will be a 9 strikes progressive tournament where 1st place gets no strikes, second place gets one strike, third place gets two strikes, and 4th place gets 3 strikes. When you have 9 strikes, you are out. We will go until only one player remains. Once there are only 2 players left, the loser of each game will receive 2 strikes instead of 1.

First round groupings are random. After that, you will be grouped with players that have a similar number of strikes. Player order will be balanced.

If you are late for your current round's game and you have not communicated with your group where you are, you will be plunged until you return. Please be respectful of the other players' time. If your entire game has to be plunged for you, you will receive a game score of zero for that round. If you are late more than once in the event, you will be eliminated from the tournament.

Amazing race is a fun and thrilling adventure in pinball. We will have a determined ladder seating coming out of the Matchplay qualifying. The last seed will walk up to the first game in a 6-8 game row and place the highest score they can with three balls. They will stay at that game till the next seed plays their first game on the same machine. If player two surpasses player ones score at anytime within their 3 ball limit they will move on to machine two and start playing their game on that machine. If player two is unable to surpass player ones score with three balls they will remain waiting on game one and player three will start their first game on machine one, while player one proceeds to play machine two. Whomever has the lowest score and did not proceed to the next machine in line will be eliminated from the competitors. Play will continue until one stands.

Preregistration is on matchplay
“Pincinnati Women’s 2022”
Players may add themselves or email tournament director Bre Reynolds at brescrossstitch@gmail.com 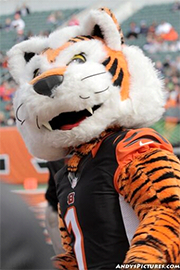 Starts at 2 pm, check in at 1:30 pm, limited to 64 entries. After 4 of the 8 qualifying rounds, there will be a 30-min break. There will be another 30-min break after qualifying is over. Log into http://Matchplay.events/ to see your groupings, enter results for you group, and follow along with the event.

Qualifying will be 8 rounds of single game matchplay (3 and 4 player groups). First round groupings are Random. After that, you will be grouped with players that have a similar number of points. Player order will be balanced.

The three games played each round of finals are chosen by picking a bank from the list which will have one game from various eras. The top seed of the group will choose the bank of games. The player positions are predetermined and are as follows:

B division finals - Same format as A division. B Division will play along with A Division and will not be able to play the same banks that were already chosen by A. See A finals above for the order in which B groups choose.

Sunday Running of the Gauntlet

Gauntlet runs start at 10 am. Pay at the Gauntlet entrance in cash only. $10 per run. There are 6 games in the Gauntlet. Each game will have a posted goal on them. These goals will be posted on the games all weekend at the show so practice early! This is a time trial type event. When you start, you have 6 mins to complete all 6 tasks.

If you complete the 6 tasks in under 6 mins, we will take down your time and rank it against the other players. If you fail to complete all 6 tasks, we will use the number of tasks you did complete for the standings.

Before you can run the gauntlet a second time, there must be no one waiting to play their first attempt. We want to get a chance to as many unique players as possible.

If you are in the top 50% of times recorded by 2pm, you will make finals. First round of finals will have each player run the gauntlet again. Top 25% of the first round of finals will make the FINAL ROUND of the Gauntlet. Then those players will run the Gauntlet one last time. Fastest time will win the event. Players with the fastest times from the previous round will go last in the following rounds.

Sunday Running of the Gauntlet Payout

All tiebreakers that are significant (to decide A or B division in finals or to decide a better or worse payout) will be decided via a ONE BALL, random game sudden death playoff. If the tie is to advance in the finals, or decide the 1st/2nd or 3rd/4th tiebreaker, one FULL GAME will be played on a random game.

All rulings made by any of the TDs are final. Please do not ask for second rulings. We will use the IFPA/PAPA rules as a guideline, but one common ruling we will make that differs is this. We will allow multiball to continue with a stuck ball as long as at least two balls are live. Once the player is down to one ball live and one ball stuck, please call a TD over to get the live ball trapped up so we can free the stuck ball. If a ball is stuck on an outlane post, you will be given the option to try and shake the ball loose or have the TD drain the ball for you.

Don't make your own rulings!

If you do and someone wants a ruling after the fact, I will not change anything. If in doubt, call over a TD to help you.

Make sure it is your turn!!

If you play out of turn, you will receive a zero game score for that game.

Do not tilt through!!

I do not want to see anyone doing anything to the machines after a drain. Rage tilting, punch lockbars, coindoors, hitting cabinets, etc. that I deem to not be an attempt to actively save a live ball, you will receive a warning for the first offense. Second offense your day will be done. Also, this goes for disrespecting other players. Everyone be respectful to one another. We have a great group playing, so i doubt we have an issue with this. Just a reminder. It will be crowded, people will bump into you while playing most likely. Let it go. Do not let things distract you. Embrace the distractions and you will play better! Also, no loud negative outbursts. Taunt the game, talk to yourself, be lighthearted about it, but do not have these immature displays of negativity and outbursts of F bombs. It makes others uncomfortable and it is unsportsmanlike.